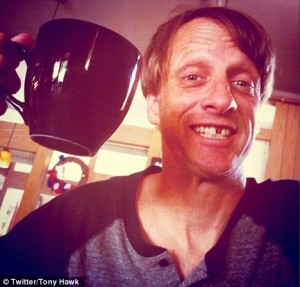 He is widely considered to be one of the greatest skateboarders of all time.

But even Tony Hawk can suffer the occasional mishap.

‘Oops, doubles with Staab went wrong at Kona. Anyone know a good dentist in Savannah?’ he wrote on his Twitter account. ‘Not a joke.’

The star accompanied the post with a picture of himself smiling broadly and his front tooth hanging out by a thread.

However, he must have managed to find a dentist, as a day later, he posted another photograph of himself without his front tooth alongside the caption ‘My new look.’

For many kids in Southern California, Tony Hawk is a role model.  He’s a professional skateboarder, Birdhouse clothing company owner, and just cool dude … And unfortunately, he is now a role model for ‘why to wear a mouth guard.’  A mouth guard worn during skateboarding should be just as important as wearing a helmet, knee pads, and wrist guards.

PS:  Below is a picture I took at Sports Chalet (on Jamboree and 5 Freeway) and Dick’s Sporting Goods (In the Irvine/Tustin Marketplace).  You can easily find an awesome mouthguard here for around $20.